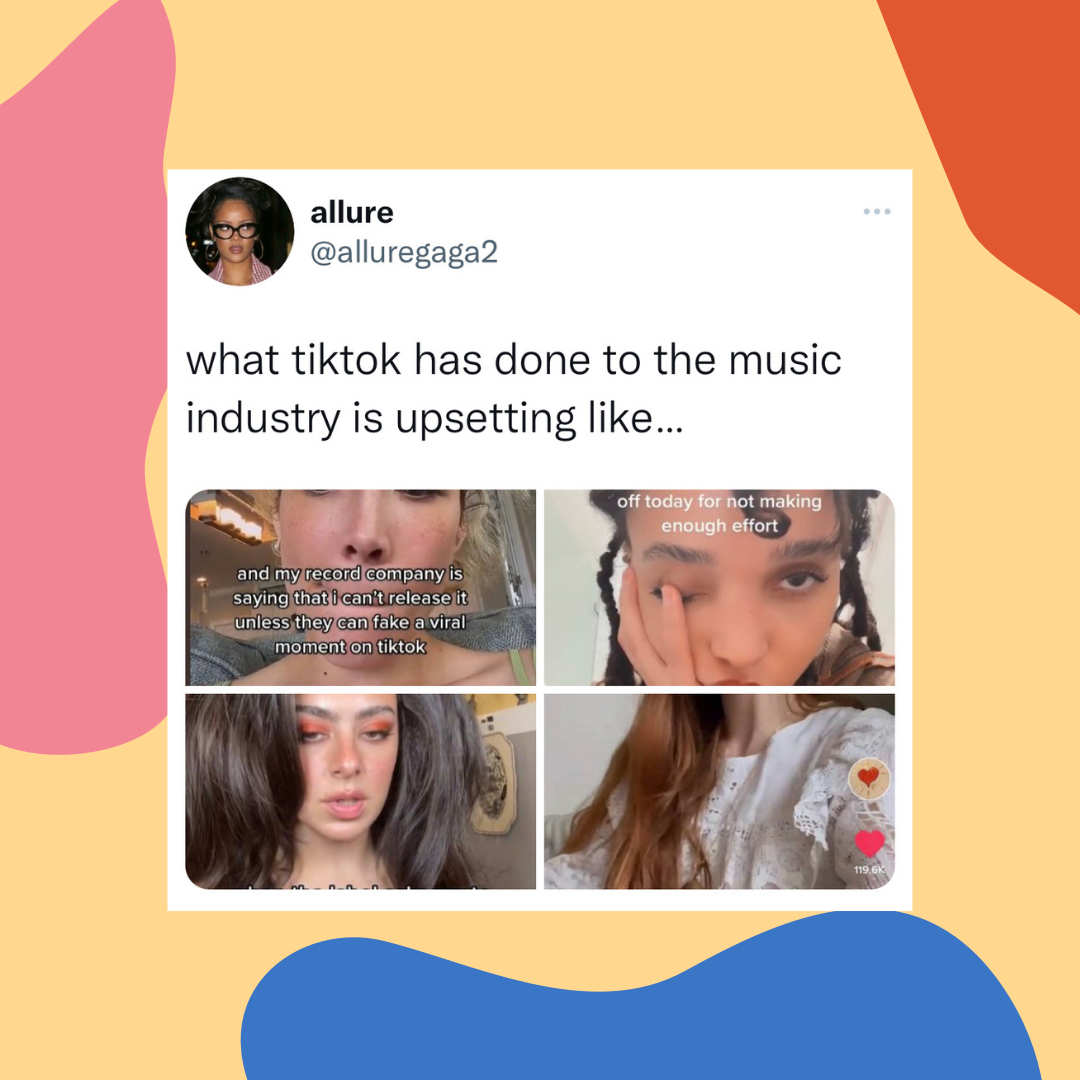 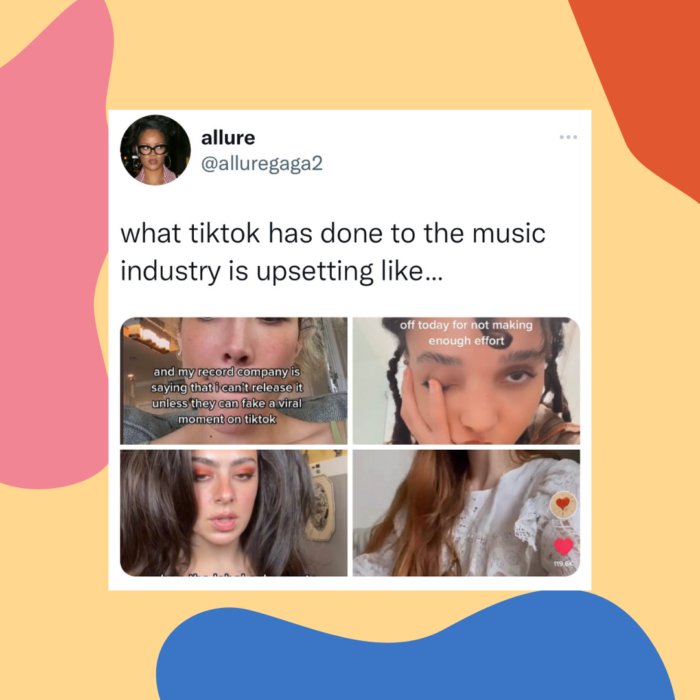 TikTok Vs The Music Industry
May 2022

Since its stratospheric rise, TikTok has undoubtedly become a crucial part of the marketing strategy for music artists, acting as a tool for them to share and market their music. Many of the biggest pop hits from the past year, such as Glass Animals’ “Heat Waves” and Encanto’s “We Don’t Talk About Bruno,” owe part of their success to their virality on TikTok, where users lip sync to the songs, create memes from them, or use them as soundtracks to their daily life.

When TikTok gained momentum, its freewheeling nature allowed smaller or independent artists to build their audiences, one of the biggest success stories being Doja Cat. This has driven the need for major labels to incorporate the platform into their marketing campaign budgets, which might have traditionally gone toward billboards or magazine spreads. Just like MTV or the traditional radio stations were back in the day (yes, we feel old too), TikTok is where popular music lives right now and labels are beginning to understand this.

The allure of TikTok is that musical content can go viral quickly, offering the potential to save millions on traditional marketing campaigns by benefiting from user-generated content which essentially acts as an organic word of mouth form of marketing.

Data compiled by Cirisano shows TikTok users are more likely to spend money on music, and be more invested in it. 40% of active TikTok users pay a monthly subscription for music, compared to 25% of the general population. And 17% buy artist merchandise monthly, compared to 9% of the general population. TikTok is clearly the place to be for any musician who wants to tap into a young and engaged audience.

But as the app has risen in prominence, a growing number of artists have expressed distaste on the app, alluding to the pressures they’ve received from labels to post more content surrounding new releases.

Halsey is the latest artist to speak out about this pressure, posting a viral video (ironically, on TikTok). In the caption, she said:

“Basically, I have a song that I love that I want to release ASAP, but my record label won’t let me”.

This sparked a wider conversation on Twitter, where one user shared screenshots of videos from Charli XCX, Florence Welch, and FKA twigs—all suggesting that they were being pushed into making TikTok content.

Responding to the tweet, singer-songwriter Vérité said that “having to fake viral moments to release art is an entire new level of soul sucking.” 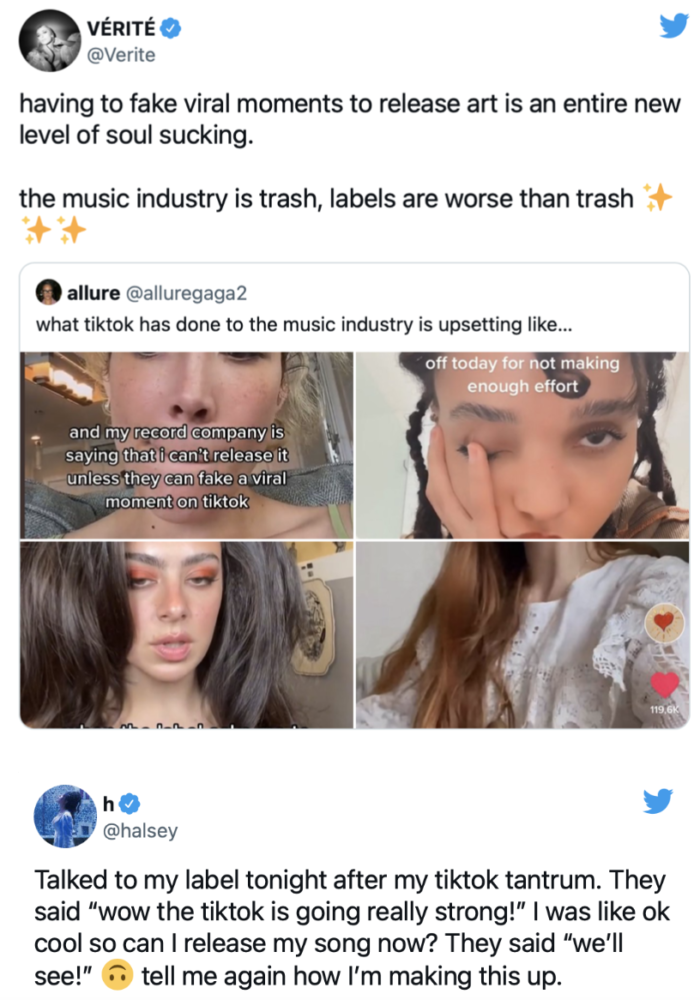 However, In some cases, artists do seem to enjoy being on TikTok. Singer, Lizzo regularly shares vlogs and recipe videos and she heavily promoted her most recent release ‘It’s About Damn Time’ on the platform, contributing to its viral success..

Going viral on TikTok appears to be a double-edged sword for musical artists. On one hand it can catapult them to unprecedented visibility in markets around the world instantaneously with little to no spend behind it, but on the other hand, should artists be given some form of artistic control when it comes to marketing their music? Is the line between artist and content creator becoming more blurred?

Ultimately, it seems like as long as audiences continue discovering new music through TikTok, and viral moments continue to launch indie artists to A-listers, labels will continue searching for new ways to get that music onto ‘for you’ pages.