Schwimmer: Off the Hook
October 2018 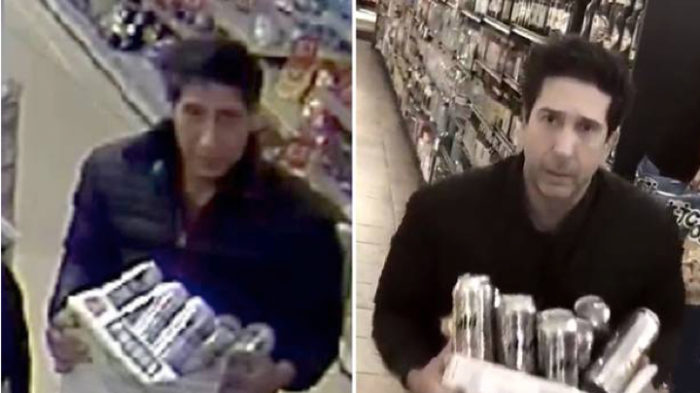 Understandably, the post went viral after people noticed that the suspected thief, who was captured on CCTV buying a crate of beer, bore an uncanny resemblance to Friendsstar David Schwimmer.

After posting the CCTV image on Facebook, users were quick to respond with references to the 90s sitcom.

Once the witty replies came rolling in, the Blackpool Police answered with the following:

“Thank you to everyone for your speedy responses. We have investigated this matter thoroughly and have confirmed that David Schwimmer was in America on this date. We’re so sorry it has to be this way.”

The Dumfries Galloway Police Division even got in on the act by sharing this post: “If you see him keep away, he is known to have studied Karate and we believe he has mastered the art of Unagi, the state of total awareness,”– in reference to an episode from Friends where Ross proclaims he is an expert in self-defence.

Reminiscent of the Jeremy ‘hot convict’ Meeks’ mugshot, the Facebook post has performed phenomenally well, receiving over 65,000 likes and reactions, and 113,000 shares in total.

However, the jewel in the crown came from Schwim-Schwimmer himself. The actor recreated the now infamous beer-clutching CCTV shot with his own post on Twitter with the following caption “Officers, I swear it wasn’t me. As you can see, I was in New York. To the hardworking Blackpool Police, good luck with the investigation. #itwasntme”.