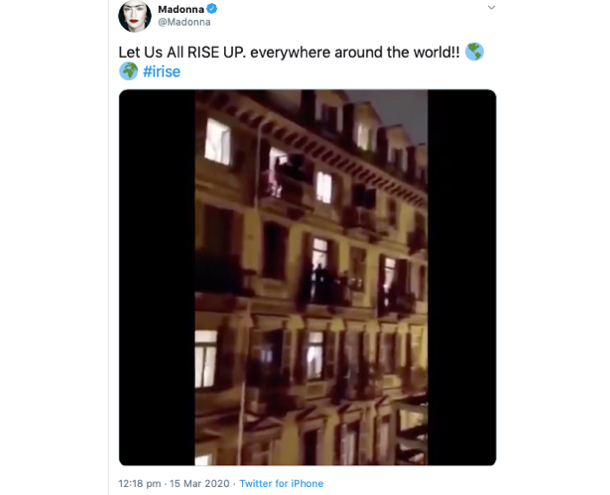 Our top story this month is how celebrities have fallen for a troll meme that claims Italian neighbourhoods in quarantine are singing their songs. Loudly.

Madonna, Cheryl, Katy Perry, Shawn Mendes and Aya Nakamura are all victims, and shared emotional messages after being moved watching neighbourhoods come together and belt out their songs. Of course, these videos were fake. 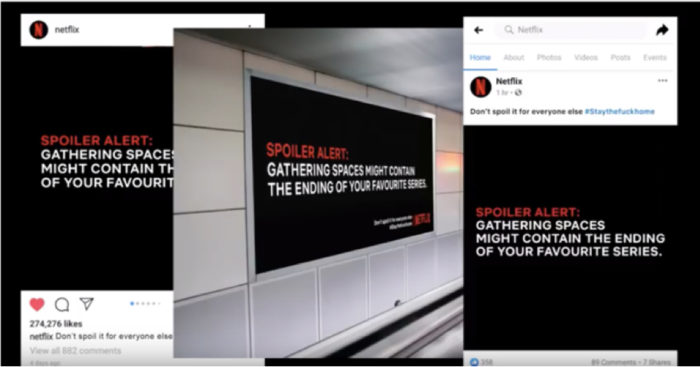 During the pandemic, Netflix has helped us #StayInside through providing endless entertainment. However, the latest unofficial campaign fills billboards with spoilers from trending Netflix originals. If the virus doesn’t stop you from going out, these spoilers will. 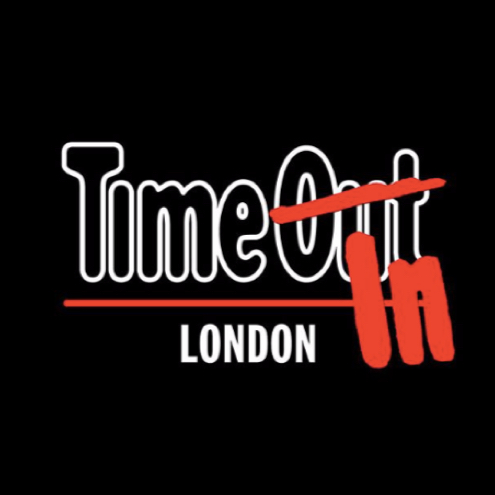 As Social Distancing has taken an effect and we are encouraged to stay inside, Time Out has rebranded to Time In.

Both the New York and London editions of the print magazine and website now sport the new branding and are championing entertainment avenues closer to home such as ‘The 25 best feelgood movies on Netflix’ and ‘The Best Yoga studios streaming online’ . 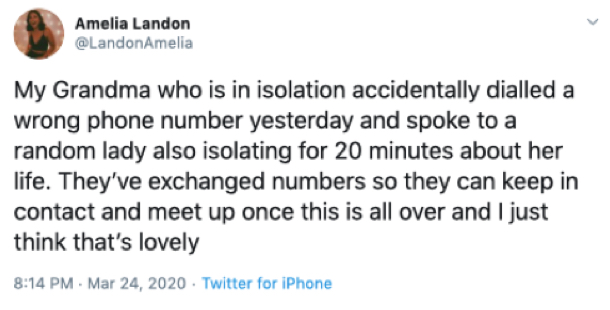 Isolation is very difficult for those who live on their own. However, the internet has been astounded by a wholesome Grandma who found a friend after dialling the wrong number.

Amelia tweeted the story about her Grandma, and has restored our faith in community. 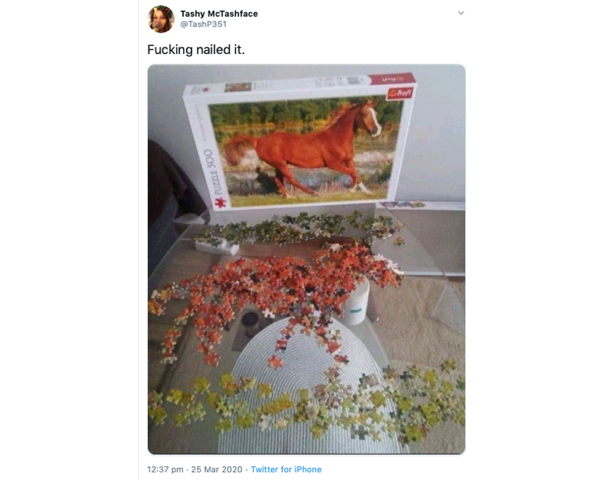 While being stuck inside can be boring, it is also a great time to learn new skills or take up new hobbies. Like Twitter user, Tash (@TashP351), who attempted a 500-piece puzzle.

Twitter went crazy for this new way to complete puzzles, and has inspired more users to get their puzzles out in such a trying time. 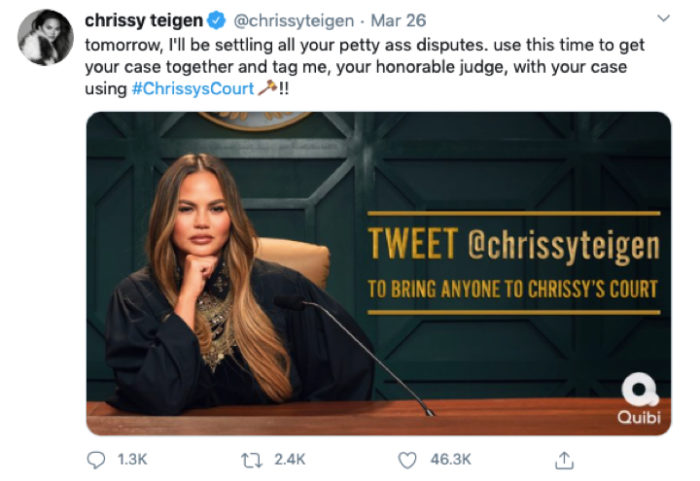 In preparation for Chrissy Teigan’s new show; Chrissy’s Court, the celebrity has taken twitter by storm in a midst to solve petty disputes. Offering renowned wisdom and advice, #ChrissysCourt has answered some of the day’s really big questions, including how to eat cheese strings, the classification of a hot dog and the best orientation for eating a Pringle, (which was later diffused by the official Pringle Account claiming there is no right or wrong). 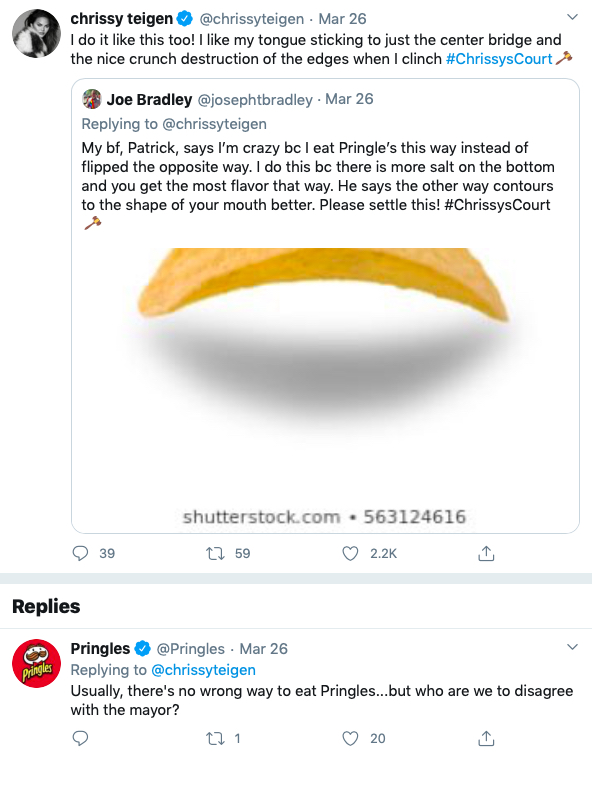 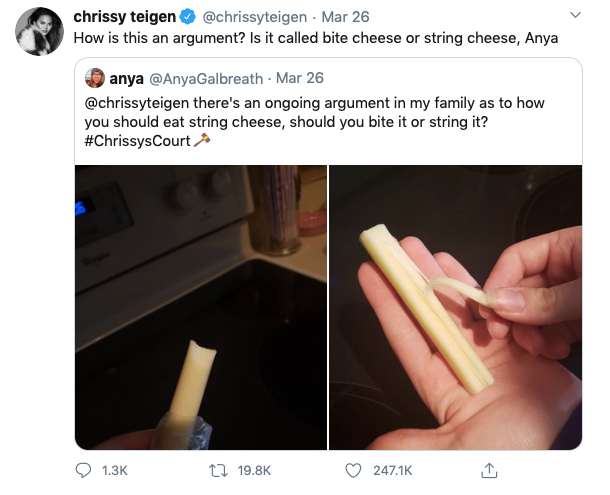 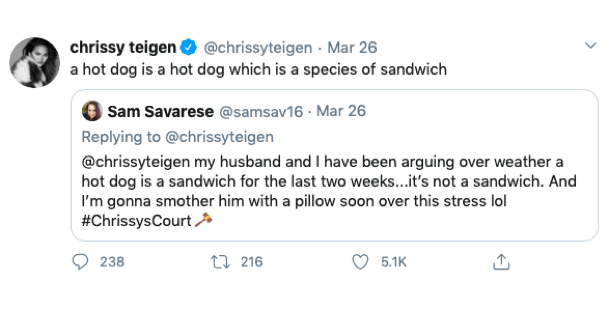