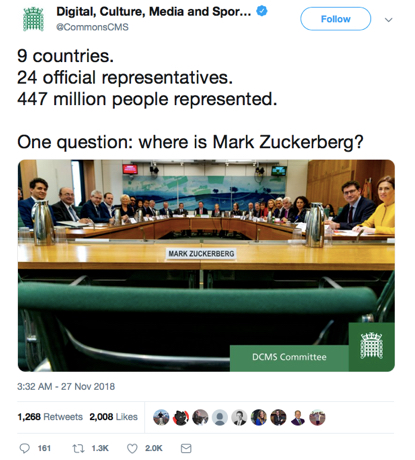 Last week, the UK, Argentina, Brazil, Canada, Ireland, Latvia and Singapore joined forces to set up an international grand committee to examine Facebook’s connection into the spreading of misinformation online. Chaired by the UK and held in London, the committee is designed to try and understand more about Facebook’s practices and intentions.

However, Facebook’s CEO, Mark Zuckerberg, yet again rejected an invite to appear in the UK to discuss his organisation’s role in various scandals. In response, the UK’s Digital, Culture, Media and Sport Committee tweeted a humorous picture of an empty chair with the question “where is Mark Zuckerberg?”.

Instead of attending in person, Zuckerberg sent Richard Allan, Facebook’s Vice President of Policy Solutions. Queue an amusing opening question from the grand committee’s chair, Damian Collins MP “We were still rather hoping your boss might make a surprise appearance”.

Zuckerberg’s decision not to attend the multi country committee is seen by many as another indication that the tech giant views itself as above the law, even in the face of several scandals, such as allegations of Russian interference during the U.S. election, the Cambridge Analytica affair, a data breach involving 87 million users and a PR firm linked to the Trump campaign – issues that have seen Facebook’s share price drop 40% since March.

The motivation of each country taking part in the grand committee is varied. As reported by The Guardian, while the UK is primarily focused on better understanding the Cambridge Analytica scandal, Ireland is concerned about the spreading of harmful content, Canada is looking into the exposure of 600,000 users personal data on the social networking site, while Australia (which didn’t attend last week’s grand committee) is examining whether the company breaks competition law.

With so many countries holding grievances with Facebook, it’s becoming clear that the social media platform needs to tread carefully and properly engage with lawmakers from across the globe (and Zuckerberg begin to show his face at such enquiries). Looking at history (Microsoft, banking post-2008), Facebook needs to act fast or find itself subjected to massive fines, over-regulation, or in the worst case scenario for Facebook, break up of its business – unless it begins to clean up its act and impose better self-governance.